Pierre Auguste Renoir was born in France in 1841 and passed away in 1919.  Renoir was a leader of the Impressionist style. Impressionism is characterized by relatively small, thin, yet visible brush strokes, open composition with emphasis on depiction of light in its changing qualities. Often impressionists accentuate the effects of the passage of time, ordinary subject matter, and inclusion of movement as a crucial element of human perception and experience. Often Impressionism offers unusual visual angles. The artists defied the rules of academic painting to create their own style; a different way of seeing the world.

Renoir came from a modest family and quit school at 13 to be employed by a porcelain manufacturer. He tired of the subject matter and was fortunate to live close to the Louve. The world thanks him for visiting the art residing in that incredible place!  His paintings are notable for their vibrant light and saturated color. Renoir suggested the details of a scene through freely brushed color so that his figures fuse softly with each other and with backgrounds. 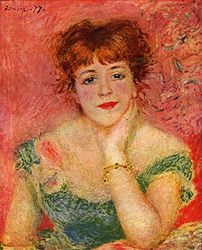 Portrait of Jeanne Samary was painted in 1877. It resides in the Pushkin Museum of Art in Moscow. Jeanne Samary was a French actress at the Comédie-Française. I like the colors in this portrait. I see an active person resigned to sitting for hours on end. She doesn’t appear reluctant nor does she look bored. But she looks to me as if a deep and restless sigh will escape her soon. 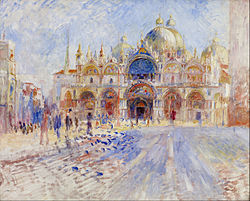 The Piazza San Marco, Venice was painted in 1881 and resides at the Minneapolis Institute of Art. On his tour of Italy, Renoir made a stop in Venice in late October 1881. He depicted the domes of the Cathedral of San Marco gleaming in the midday sun. This painting was left in a sketch-like state without any studio reworking. Executed in a typically Impressionist technique, the canvas is loosely covered with bold, hurriedly applied strokes of bright, unmixed colors. Simple daubs of paint depict the light falling across the church's façade, as well as the people and fluttering pigeons on the piazza. 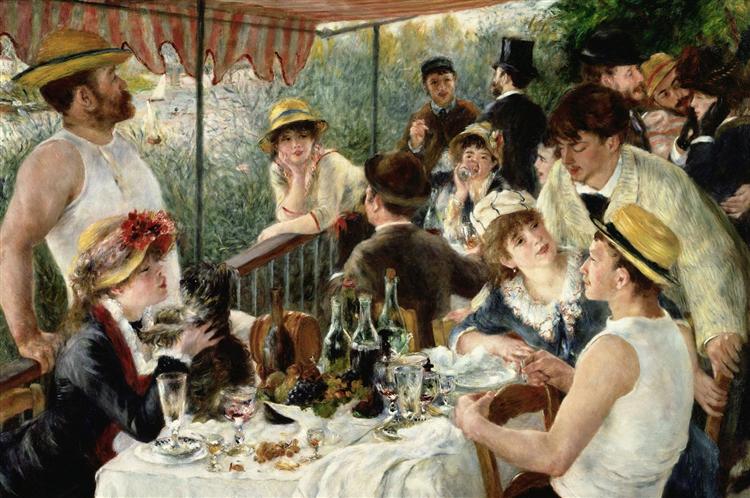 Luncheon of the Boating Party was painted in 1881. It is oil on canvas and measures 51”x68”. It resides in the Phillips Collection in Washington DC. Renoir’s future wife Aline is seated lower left playing with the dog. The diagonal of the railing serves to demarcate the two halves of the composition, one densely packed with figures, the other all but empty, save for the two figures conversing and made prominent by contrast. In this painting Renoir has captured a great deal of light. The main focus of light is coming from the large opening in the balcony, beside the large man in the hat. The sleeveless shirts of both men in the foreground and the table-cloth all work together to reflect this light and send it through the whole composition. 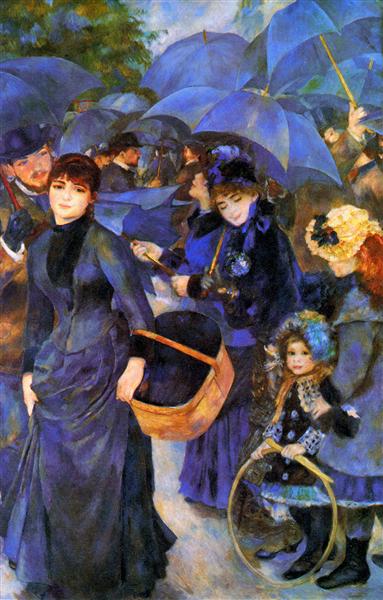 Renoir painted Umbrellas in 1885. It resides in the Dublin City Gallery. We are placed in a busy Parisian street among 6 principal figures that fill the foreground.  A crowd completely blocks the boulevard beyond. The top quarter of the painting is filled with umbrellas.  The painting was completed in 2 stages with a gap of 4 years between each stage. It shows the change in Renoir’s art during the 1880’s when he was moving away from Impressionism and looking toward classical art. The group on the right includes a mother and her daughters and the woman in profile in the center are painted in a characteristically Impressionist style with delicate strokes of rich, luminous tones. On the left of the composition and completed during the second stage Renoir used a more linear style. The figures, including the full-length young woman and the man standing behind her have clearly defined outlines with precisely drawn features for a greater sense of three-dimensional form. 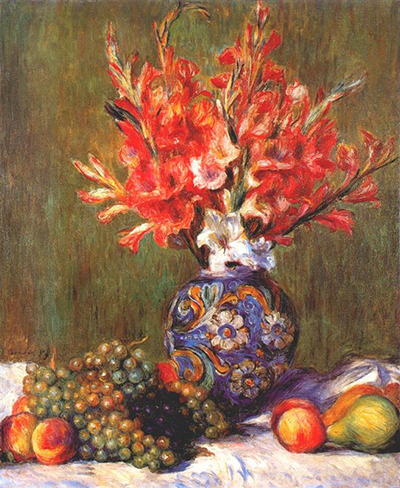 Still Life Flowers and Fruit was created in 1889.  This exquisite and sumptuous painting is in a private collection.  When Renoir painted this piece he rejected Impressionism as he perceived limitations with the style. We are drawn by 3 distinct elements, the flowers, the fruit and the vase. He used the vibrancy with vivid hues of Impressionism.  The audacious red he used in the bouquet and in both groupings of fruit masterfully connects the separate elements and brings balance to the composition.

Sometimes our lives have stellar moments we think about for the rest of our lives. Throughout my life Renoir has been an artist I go back to over and over again. I have been lucky to attend 4 different shows of Renoir paintings. It doesn’t matter if what I am seeing is one I have seen in a publication somewhere. It will give me joy to see it up close and personal. It will help me lift myself. I saw a Renoir exhibit in Belgium, twice in Canada and in the USA. Many artists affect me this way and I am fortunate to appreciate it.

I hope you enjoyed reading about the fabulous Pierre Auguste Renoir. If you did enjoy this please consider sharing it with your friends. I am grateful for every share I get!