Frederick McCubbin lived from 1855 to 1917. He was an Australian artist and art teacher.  He was a member of the Heidelberg art movement, also known as Australian Impressionism.  During his art career his motivation was to show the interaction of pioneers and the Australian bush. Frederick McCubbin, while known mostly for his iconic pioneer paintings, did paint throughout is life. While on tour in Europe in 1907 he became familiar with the art of J.M.W. Turner. McCubbin’s art became lighter, his brushwork free and more relaxed. Many believe his best work is the later work. It is rather sad the later work isn’t known as well as his earlier, also amazing work. 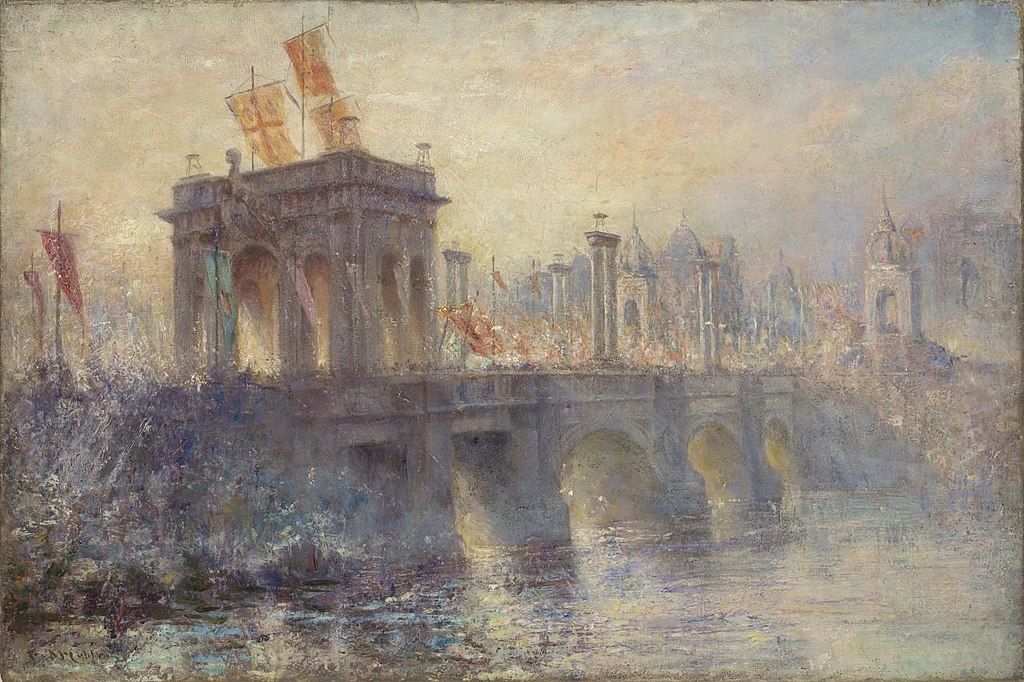 “Princes Bridge” was painted in 1908 toward the end of Frederick’s life. The Impressionistic application of paint creates movement, spontaneity. The painting sparkles with light, shadows and atmosphere. The painting is in the collection of the National Gallery of Victoria.  I personally love the mood created in this piece.  I love the mystique and the activity and I can almost feel the dampness of the misty air. McCubbin wanted to paint the arrival of the Duke and Duchess of York to Melbourne in 1901. The painting is a veritable gem of sparkling paint, and is vivacious. It shows the artist’s skill in capturing the transient moments he lived. McCubbin painted Princes Bridge a number of times. I understand his attraction to it. 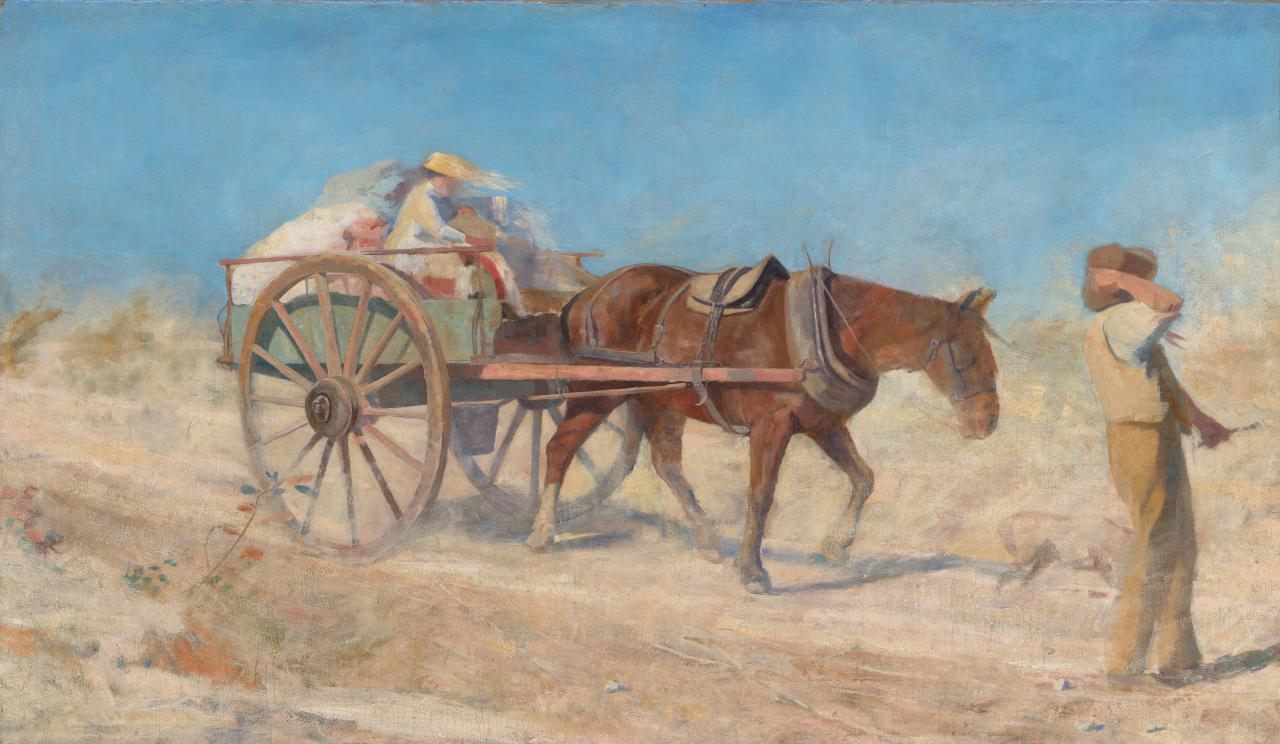 “The North Wind” is thought to be painted in 1888. It depicts a young family enroute via a bush track across a harsh and barren landscape buffeted by strong wind. McCubbin is well loved by his country because he celebrated the life of pioneers, a tough breed of we humans who achieved life dreams despite the desperate trek to where they planned to settle. 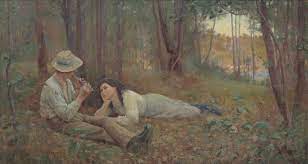 “Bush Idyll” was painted in 1893. It depicts a boy playing a tin whistle while a girl listens while lying on the ground near a lake. The painting shows how masterful a painter McCubbin was. It shows the influence of the Naturalist painting school of thought. We see a languid ease of the two figures taking a time out to steal time together perhaps, or simply stopping to rest for a little while. 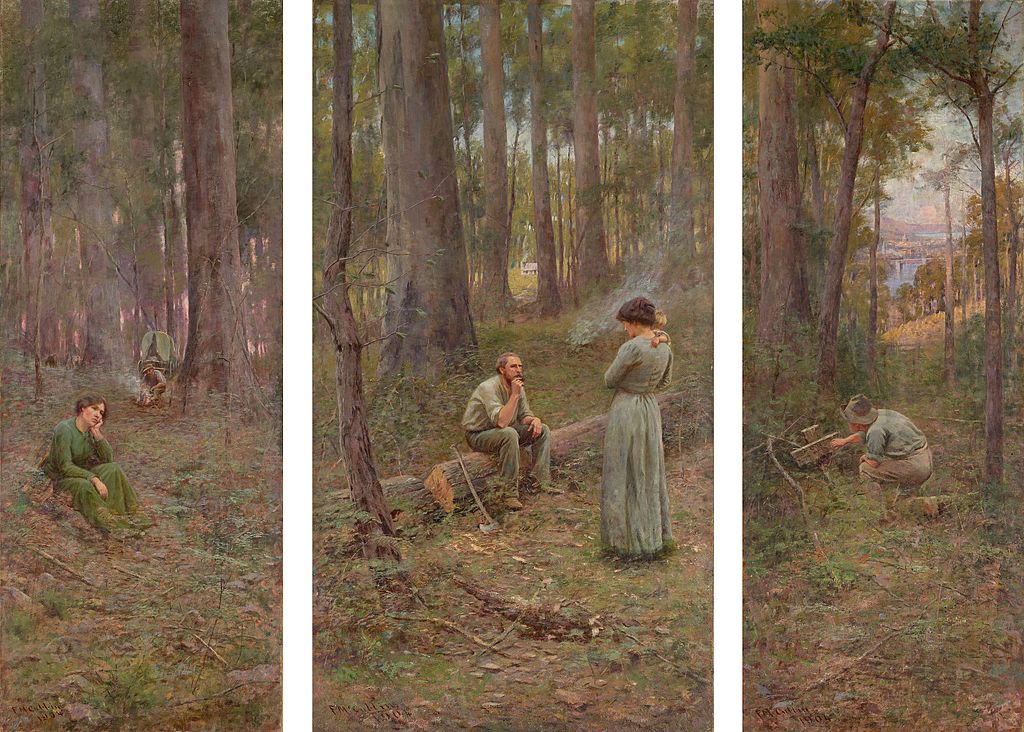 “The Pioneer” was painted in 1904 and now resides at the National Gallery of Victoria in Melbourne, Australia. The painting is a triptych; the three panels tell a story of a free selector, a farmer, and his family making a life in the Australian bush. It is widely considered one of the masterpieces of Australian art. While the story is a little ambiguous in the three paintings McCubbin refused to explain it any further.  The left panel shows the selector and his wife settling on their selection; in the foreground, the woman is deep in thought. In the center panel, the baby in the woman's arms indicates that some time has elapsed. A cottage, the family home, can be seen in a clearing through the trees. The right panel shows a man crouching over a grave. A city is visible in the background; again indicating that time has passed. It is unclear whose grave it is, and if the man is the pioneer, the baby from the center panel, or a stranger stumbling across the grave.

A study of the materials and technique used in the painting revealed that in order to add "luminosity and texture McCubbin covered the ground in the center panel with a further layer of lead white paint; the brush marks in the stiffer lead white can be seen through the later layers in raking light. Raking light also shows that a palette knife has been used in some places to apply paint to the surface. The painting is still displayed in its original frame although it is believed the frame was resurfaced at some point.

Curators get to closely inspect art for different reasons. One inspection solved a delicious mystery involving this iconic Australian painting.

“Found” was painted sometime in the 1880’s. The painting depicts a life-size man holding a small child. A black and white reference photo was found in artist’s scrapbook in the museum. “Found was exhibited in 1893 at the Artist’s Society Exhibition but didn’t sell due to its high price.

In November of 2020 Michael Varcoe-Cocks was doing rounds, examining paintings with a flashlight. He came to “The Pioneer” and found a form in the texture of the Pioneer that did not relate to the composition. McCubbin was known to build texture into his work by layering.

Further tests were ordered. Mr. Varcoe-Cocks investigated further, consulted x-rays taken in 2013 and spotted shapes not present in the final composition, but he was not able to place the for he saw in The Pioneer. Several days later the curator recalled he saw the form in McCubbin’s scrapbook. Michael Varcoe-Cocks said in an interview “If I wasn’t walking through in the dark, with a flashlight on my own, I probably wouldn’t have had time to focus on it, make the connection and revisit the x-ray and to rediscover this little photo in a scrapbook we had in storage.” 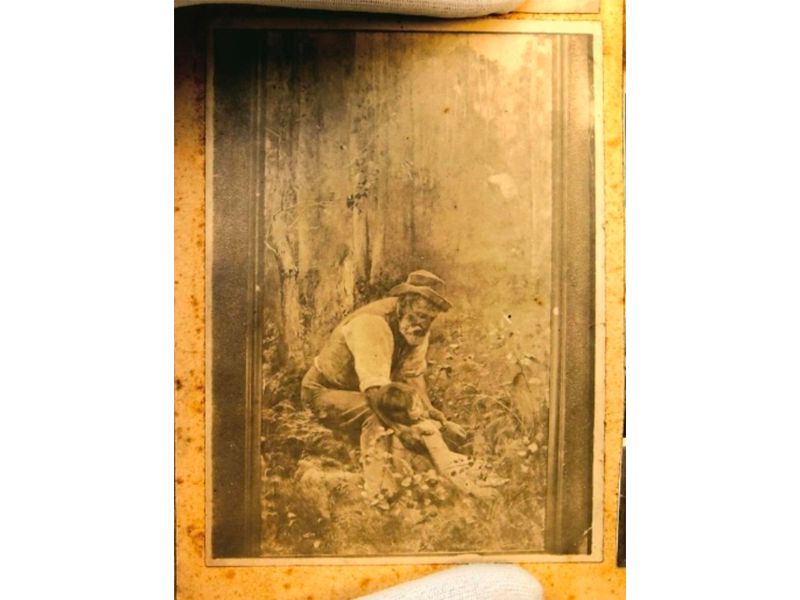 Here is a copy of the reference photo found in McCubbin’s scrapbook. Throughout history the most tragic consequence in anyone’s life is the loss of a child. Children living a pioneer life wander and are swallowed up with awful ease in the wilderness. In 1885 14 year old Clara Crosby started walking the mile and a half walk to visit her mother.  The day was cold, but not difficult. It took 2 days before anyone registered she was missing. She became too sick to make it to the creek for water. She sheltered inside a hollowed out tree. The one thing Clara continuously did was cry out. She was heard and rescued by men rounding up horses. 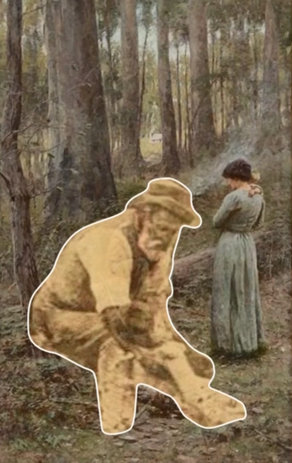 Michael Varcoe-Cocks used digital technology to superimpose the form onto the middle panel of the Pioneer to show what it looked like before the Pioneer triptych was painted. Many artists paint over top of existing paintings. How incredible it is this man took the time during lockdown from the Covid pandemic to wander around the National Gallery of Victoria in the dark with a flashlight to see this wonderful anomaly within a painting that hung for 117 years.

Frederick McCubbin brought quite a legacy to Australian art. He formed close relationships with other artists to form the nucleus of what became known as the Heidelberg School. It was a plein air art movement named after Heidelberg, the site of another one of their camps. He taught many students throughout his career. It is quite amazing Frederick McCubbin is a lead story in the news for “Found” 114 years after his passing.